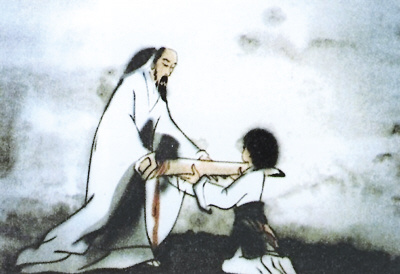 Ron Stallard (Yorkshire CBP Group): I came across the enchanting animated short film Feelings of Mountains and Water recently. It has no dialogue and is made using only traditional Chinese ink-wash painting techniques. The master animator 特伟 Te Wei (1915-2010) made the film back in 1988 for the Shanghai Animation Film Studio. Te Wei’s painting technique recalls many old masters including八大山人 Bada Shanren’s Fish and Rocks (1696). The film won an award for best animated film in 1989 and is now widely available for free on YouTube and Vimeo .  It tells the simple story of an elderly scholar who falls ill and is nursed back to health by a young boy. In return the boy is given lessons on the古琴 guqin (a traditional plucked string instrument) but the real stars of the film are the landscapes which are full of birds, fish and water. The only sounds to be heard are from traditional music instruments including the guqin, dizi and sheng as well as birdsong, wind and water.  It is an excellent example of skilful pairing of Chinese brush painting technique and traditional music. It was a bold move at the time as it reveres many traditions that had been widely castigated as representing out-dated values and thinking. It brought the ancient skills into the modern world where it stands alone as a superb demonstration of artistic endeavour.